The most comprehensive analysis of the Terracotta Army's weapons has revealed that the craftsmen responsible for arming the 7000 warriors, chariots and horses followed a sophisticated labour model now associated with Toyota, the world's biggest car maker. 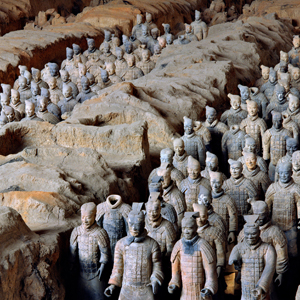 Toyota is widely credited with introducing an alternative method of mass production to standard assembly lines. Sometimes referred to as 'Toyotism', the approach involves using small workshops of highly skilled engineers, capable of producing any model of car as and when it is needed, rather than a production line where each unit concentrates on making individual components.

Now new research by a team from UCL's Institute of Archaeology and the Museum of Emperor Qin Shihuang's Mausoleum in Xian has shown that, rather than being a novel innovation, 'Toyotism' may have been developed by craftsmen working on China's Terracotta Army more than 2000 years before the Japanese carmaker was founded.

The paper "Forty Thousand Arms for a Single Emperor", published in the current edition of the Journal of Archaeological Method and Theory, demonstrates the extraordinary level of skill and versatility of the craftsmen who created the Army and their thousands of bronze weapons. The paper is the latest publication from the "Imperial Logistics" project, the largest international project to investigate the Terracotta Army.

Lead author Dr Marcos Martinón-Torres (UCL Institute of Archaeology) said that they had inspected more than 1,600 arrow heads and, finding them identical to the naked eye, assumed they had come from a single, large-scale production line. However, when they analysed the chemical composition of the bronze used to make the arrow heads they found that each quiver-full was made individually with a single batch of bronze being melted in a crucible, without any mixing of batches.

Dr Martinón-Torres said: "The first Emperor Qin Shihuang, who commissioned the Terracotta Army and the rest of the city-sized mausoleum at Xi'an before he died, was obsessed with standardisation and introduced standard units of measurement, currency and script. He must have demanded very exact standards for the Terracotta Army's weapons because their level of accuracy is comparable to that of modern mass-produced items.

"It is amazing that these arrow heads are so similar - identical to the human eye - yet chemical analysis shows they came from separate production units that would have produced each entire quiver with all of its parts: from the bronze head through the bamboo shaft and up to the feathers.

"We now believe that the craftsmen who made them also constructed the swords and other equipment the soldiers carry, and that a cellular production system was also employed for the warriors themselves. These craftsmen must have been very skilled and versatile to be able to make such a wide variety of items, yet complete each one to such precise standards."

Dr Martinón-Torres added that although the Toyotism-style approach would likely produce weapons and other equipment at a slower rate than a standard assembly line, in the case of constructing the Terracotta Army it may have been more efficient.

"When you are making the world's first Terracotta Army, you are unlikely to know exactly how many of each item you will need - particularly when the specifications are so high that some parts may not meet them and will have to be recast," he said. "The Toyotism approach allows your craftsmen to switch to producing the parts that are needed when they are needed.

"In addition, the Army's soldiers are arranged in such a tight formation in the mausoleum that only the front row could be worked on at any given time. If a single production line had been used the entire process would have to stop every time a single worker failed to keep up with the others. The Toyotism approach avoids this hazard - if something is urgently needed to finish a soldier, one of the workshops can stop whatever it is doing and quickly create this one part."

To make such similar weapons the craftsmen employed what were then cutting edge manufacturing techniques. Dr Martinón-Torres and his team found parallel, microscopic scratches on the blades, indicating that they had been sharpened on a wheel, rather than with a hand held tool. This makes the Terracotta Army's forty thousand weapons the first known blades to be sharpened with a wheel.

In total, the mausoleum at Xi'an covers over 50 square kilometres - the size of a small city - of which the Terracotta Army is only one part. Ancient Chinese historian Sima Qian, writing 100 years after the mausoleum was built, said it took 700,000 men 40 years to build the entire complex.  All of the weapons held by the soldiers are real arms, ready for battle, rather than replicas.

The UCL Institute of Archaeology signed an agreement with the museum at Xi'an in 2006 to launch a large-scale project to investigate the Terracotta Army. The project, "Imperial Logistics: The Making of the Terracotta Army",  was recently recognised as a British Academy Project, one of only five research projects to receive this prestigious designation since 2008.

The researchers have been employing innovative methods to investigate the Army, blending scientific and geographic approaches that are rarely integrated in archaeology. Among the equipment they have adapted are portable x-ray fluorescence spectrometers, more commonly used by mining prospectors, and polymer putty used by dentists to take teeth impressions, which they use to create accurate moulds of sections of the weapons, to be examined under a scanning electron microscope.