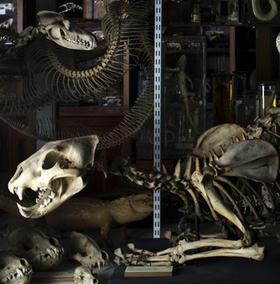 UCL's Grant Museum of Zoology reopens on 15 March, allowing some of the rarest extinct animal specimens in the world to be displayed for the first time. Previously lost dodo bones, the remains of a quagga (an extinct species of half-striped zebra) and a giant Irish elk with antlers measuring nearly 3 metres across, are among the 70,000 specimens that can be seen in the new museum space.

It still holds many specimens collected by Robert Edmond Grant, the first professor of zoology and comparative anatomy in England. Because of the age of the collection, many of the species in the museum are now endangered or extinct.

UCL Professor of Genetics, Steve Jones, said: "Dylan Thomas described Swansea Museum as "a museum that should have been in a museum". That was meant as somewhat of an insult, but for the Grant Museum it is praise indeed: a restored Victorian treasure-house crammed with specimens from a bottle of preserved moles to extinct zebras and (just identified) the legs of a dodo. And all this was put together by the man that taught zoology to Charles Darwin - which means, I am sure, that this will become a standard stop on the London tourist trail."

The Museum is also turning to cutting-edge technology to look at how visitors can interact with objects and uncover deeper themes about natural history. Dotted alongside displays of stuffed chimpanzees and huge anaconda skeletons are iPads, asking provocative questions about the ways museums operate and the role of science in society.

The first questions the museum is asking its visitors to answer include: "What makes an animal British?", "Can keeping pets be justified given their impact on wildlife?", "Should science shy away from studying biological differences between races?"

People can engage with the topics either via the Museum's iPads, their own smart phones via QR codes (square bar-codes), or using twitter, breaking new ground for museum engagement. Continuing the Museum's tradition of research and learning, 'QRator' has been designed as part of a UCL Centre for Advanced Spacial Analysis and UCL Centre for Digital Humanities research project called "Tales of Things" (http://www.talesofthings.com).

QRator is an iPad-based system that allows everyone to be a curator and share their views on an exhibition. Visitors can examine an object before leaving their thoughts about it on an iPad to create a digital, 'living' label that subsequent visitors can read and respond to.  By downloading a free application to an iPhone or android phone, visitors will be able to see rolling updates to the digital label after they leave the museum, or via twitter.

Natasha McEnroe, Manager of the Grant Museum of Zoology said: "We want to give our audiences unprecedented opportunities to engage in the museum's work and feed into how our museums should be run, opportunities for them to tell us what they know and need to know about the life sciences, what issues they care about and want museums to raise."

Image: Lion skeleton in a case of carnivores. Most of the Museum's main displays are arranged so that the species are displayed with their closest relatives.  Credit: UCL Grant Museum of Zoology/Matt Clayton

UCL's Museums and Collections cover a wide variety of disciplines, reflecting the range of the university's academic work. Three collections - the Petrie Museum, the Grant Museum and the Art Collections - are open to the public. Other collections are primarily for teaching and research but can be seen and studied by appointment.

We support teaching and learning, undertake and support research and run a wide range of events and outreach programmes.